Agnès Varda Tribute Evening: ‘The Gleaners And I’ 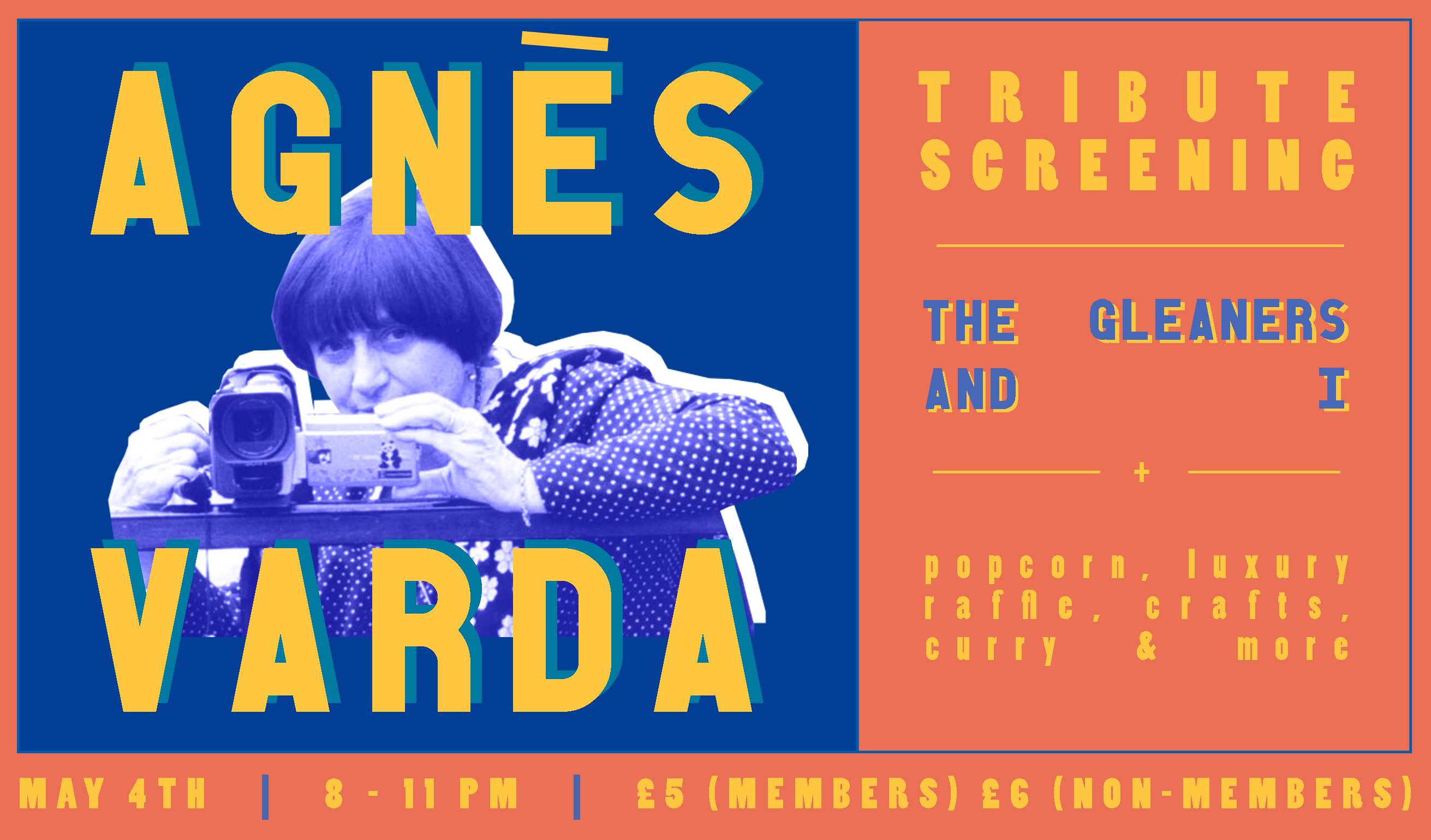 “She always performed the greatest trick of art, which is to make it look easy.”
Partisan brings to you an Agnès Varda tribute evening, where we’ll watch, craft, chat, bond, and drink together over a celebration of the life, art, and legacy of the godmother of French New Wave and cinema’s eternal femme du jour. Agnès once said: “You know, an hour and fifty-four minutes is too much for audiences. They get nervous.” So, we decided to bring you not an hour and fifty-four minutes but THREE whole hours of pure Agnès goodness this May 4th, interspersed with drink/curry/craft/chat breaks and a LUXURY AGNÈS RAFFLE (to make sure you don’t get too nervous)!
Find us upstairs at Partisan, £5 for members and £6 for non members, doors opening at 8pm with Agnès themed ‘gleaning’ crafts, curry, and chats. Crafts curry and chats will take us to a 9pm start of Varda’s tender and resonating documentary, The Gleaners and I (2000), with a short interval for drinks at 9.45. The screening will finish at around 10.30pm, at which point we will announce the winners of our luxury raffle — with a special edition Agnès Varda ‘Girls On Tops’ shirt up for grabs, as well as very fancy Manchester Gin, and a limited edition Agnès Varda screen-print! — and provide an opportunity to chat more, make friends, finish up crafts from earlier, and head down to the bar for the rest of the night.
THE GLEANERS AND I:
“The Gleaners and I is an intimate, picaresque enquiry into French life as lived by the country’s poor and its provident, as well as by the film’s own director, Agnes Varda. The aesthetic, political and moral point of departure for Varda in this documentary are gleaners, those individuals who pick at already-reaped fields for the odd potato, the leftover turnip. Describing herself as a gleaner of ideas and images from interior as well as exterior journeys gives the director a special connection with her subjects in this honest and intriguing documentary into re-use, re-purposing, and re-imagery.”
CRAFTS:
We will be making Agnès’ cat buntings made from cut-outs of her infamous cats in la Pointe Courte, Clèo, and Vagabond — and ‘gleaning’ pen/paintbrush holders/plant pots made from recycled materials (tins). You’re welcome to craft at any point during the evening — however specific breaks will be scheduled for this before and after the screening, and during the interval at 9.45pm! The half hour interval will also provide opportunity to socialise and head down the bar before we begin the second half at 10.15, heading for a 11pm finish.
!! PLUS FREE POPCORN ON ARRIVAL !!
Our celebratory evening together will end on the opportunity to chat to each other, meet new friends, and make new Manchester cinema/film connections for anyone interested.
We’re so excited to see you there and take the opportunity to celebrate with you the wonderful work of this timeless filmmaker almost 8 decades after she began. What a life! It’s not over yet! Let’s keep her alive!
See you soon!
+ Google Calendar+ iCal Export