Join us for an afternoon of films documenting, celebrating, and laughing with the women at the heart of the riot-grrl movement!

All proceeds from ticket sales will go towards the running costs for this and future Partisan film screenings. 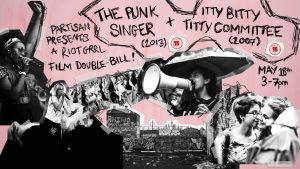 Kathleen Hanna, lead singer of the punk band Bikini Kill and dance-punk trio Le Tigre, rose to national attention as the reluctant but never shy voice of the riot grrrl movement. She became one of the most famously outspoken feminist icons, a cultural lightning rod. Her critics wished she would just shut-up, and her fans hoped she never would. So in 2005, when Hanna stopped shouting, many wondered why.

Through 20 years of archival footage and intimate interviews with Hanna, Sini Anderson’s The Punk Singer takes viewers on a fascinating tour of contemporary music and offers a never-before-seen view into the life of this fearless leader.

Jamie Babbit – director of cult classic But I’m a Cheerleader – brings to life this scrappy comedy about 21st-century lesbian identity politics. Anna (Melonie Diaz), a young Latina lesbian is suffering from self-esteem issues and simultaneous rejection from her dream college and her first girlfriend. With a stroke of luck, Anna joins the C(i)A – a group of young, angry post-feminist, neo-punk activists. As we follow their antics, and hilariously anarchic projects, a convincing portrait of a tight-knit group of women is revealed.

Inspired by the high-spirited activism of NYC’s Guerrilla Girls, and featuring a riot-grrl-heavy soundtrack, Itty Bitty is an entertaining crowd-pleaser that both celebrates and pokes gentle fun at the grungy, punk-rock world it depicts.

Accessibility: please note. The space is not currently accessible for wheelchair users. We are still fully committed to becoming accessible ASAP. We had to open before this in order to fundraise to generate the funds for a ramp and lift, and also to await planning permission to make these changes. Please contact us if you would like any more information about this.