The Meteor Explores: Homelessness in Manchester 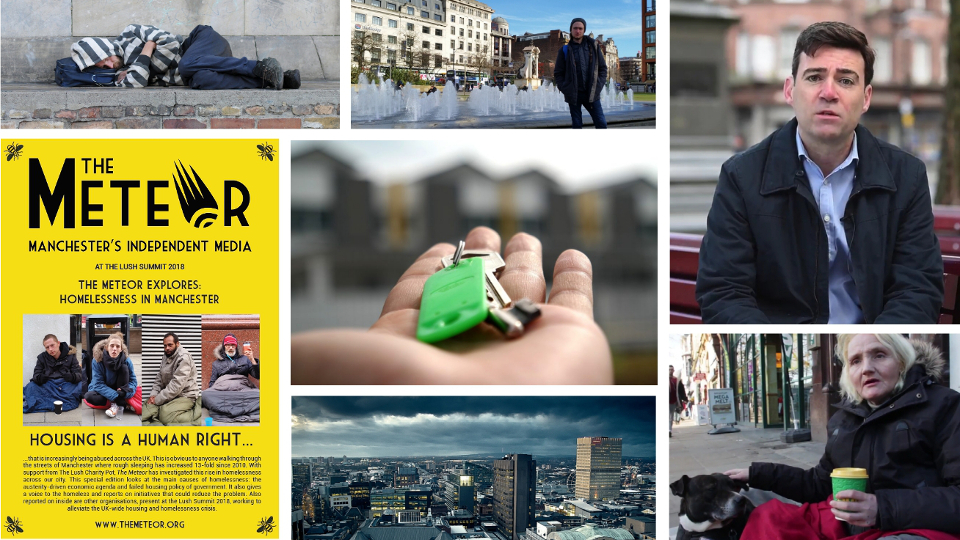 Public meeting/film screening at Partisan, 19 Cheetham Hill Road, M4 4FY, on 22 March, 7-9pm. Short films on homelessness and squatting in Manchester will be screened, and copies of The Meteor’s latest publication on homelessness will be available. The panel discussion following films will concentrate on the homelessness and housing crisis and the role of independent media in reporting it

The safety net of the ‘cradle to grave’ welfare state implemented by Atlee’s government after the Second World War is becoming increasingly threadbare due to the economic and humanitarian degradations of austerity. Increasing numbers from the cradle are falling through gaping holes in the safety net, plunging them into poverty, homelessness and often temporary private rented accommodation not fit for human habitation and highly detrimental to their health. While misery and an early grave face the growing number of destitute adults sleeping on the streets, with women dying at the average age of 47 and men at 43.

For those that regularly walk through Manchester City Centre it may come as no surprise that rough sleeping also increased by 21% across the city, from a count of 78 in 2016 to 94 in 2017; however, this statistic is widely acknowledged to underestimate the numbers sleeping rough. Both Manchester and Greater Manchester saw greater percentage increases than the 15% rise recorded across England, where country-wide numbers rose from 4,134 in 2016 to 4,751 in 2017.

The latest report from Shelter calculates that 307,000 people are homeless in Britain, a 4% rise since 2016, which means across the country one in every 200 people are currently homeless. London, unsurprisingly, has the highest level of homelessness with one in 25 afflicted, but Manchester is described as a homeless “pressure zone” by Shelter, with 3511 people homeless meaning one in 154 are without a home.

It is due to statistics like these, and the evidence of our own eyes, that The Meteor decided to report on the issue in a more comprehensive way than we had done previously.

With support from the Lush Charity Pot The Meteor investigated this expansion in human misery, and explored the main causes: the austerity-driven economic agenda and failed housing policy of government. It also gives a voice to homeless people and reports on initiatives that could help them secure a home.

The project called ‘The Meteor Explores: Homelessness in Manchester’ is the first of many exploration projects we aim to undertake. The final part of this project is this event at Partisan in Manchester on 22 March, 7-9pm, showing short films on the subject of homelessness and squatting in Manchester, followed by a panel discussion concerning the homelessness & housing crisis and the role of independent media in reporting it. We would love to see you there. Panel members will include members of The Meteor, Lousy Badger Media, Greater Manchester Housing Action and The Media Fund.

The end of this project does not end our work reporting on every aspect of the housing crisis. With national government policies set to increase the crisis over the next few years, there will be no end to the stories we need to cover, and with your help, support and input The Meteor will cover them.

‘The Meteor Explores: Homelessness in Manchester‘ series online can be reached by clicking here